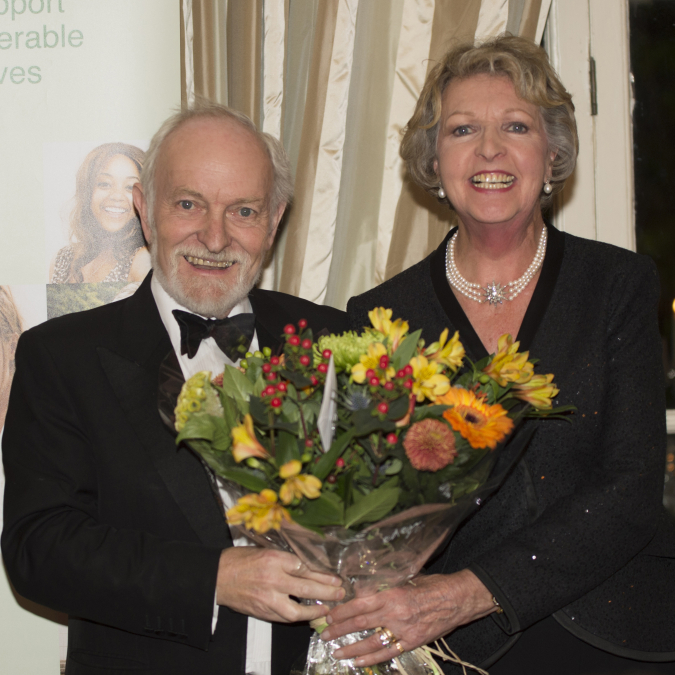 A fundraising dinner at the Royal Automobile Club Woodcote Park has raised more than £8,000 to help homeless and vulnerable people all over Surrey.

The audience was entertained by special guest speaker and Transform Patron Dame Penelope Keith DBE. Dame Penelope shared anecdotes from her appearances in the much-loved TV series ‘The Good Life’ and ‘To The Manor of Born’, as well as talking about her experiences of supporting Transform over the past 17 years.

The evening was hosted by BBC sports presenter Garry Richardson, who is best known for his appearances on Radio 4’s Today Programme. Garry talked about the many highlights of his broadcasting career, including an interview with former US President Bill Clinton live at Wimbledon. Garry also conducted an auction of artwork created by clients of Transform, to raise funds for the charity.

The evening included a silent auction and raffle, with prizes including tickets to a recording of ‘Have I Got News For You’, a spa day at Grayshott Spa, a flight over London, and a tour of Shepperton Studios. Guests at the event enjoyed music from West Winds woodwind quintet and magic from the Surrey Society of Magicians.

“We are delighted that so many people were able to join us for this Autumn Dinner in aid of Transform Housing & Support. We are very grateful both to our Patron Dame Penelope Keith for kindly speaking at the dinner and to Garry Richardson for hosting the evening. I would also like to thank everyone who made the event possible, including sponsors Holman Fenwick Willan and Osborne, and our many donors and supporters. It is very encouraging people to see such great support for the essential work carried out by Transform, which assists so many people to transform their lives and live independently.”

We would like to thank everyone who made the evening possible.

Subscribe to our newsletter to receive all the latest news and information. ‘Your vote, your choice’ for Woking young people
15 Apr 2015
accreditation